The PA court system is structured like a pyramid.  At its base are the Magisterial District Courts and the Philadelphia/Pittsburgh Municipal and Traffic Courts.  Here,  cases involving small claims, minor crimes and traffic offenses are heard.  These case opinions are not published.

The Courts of Common Pleas are the general trial courts; they are organized into 60 judicial districts. Most districts follow the geographic boundaries of counties, but seven of the districts are comprised of two counties. Court of Common Pleas are responsible for appeals from the minor courts, appeals not exclusively assigned to another court, and matters involving children and families. Pleas opinions may be found in PA County Decisions. 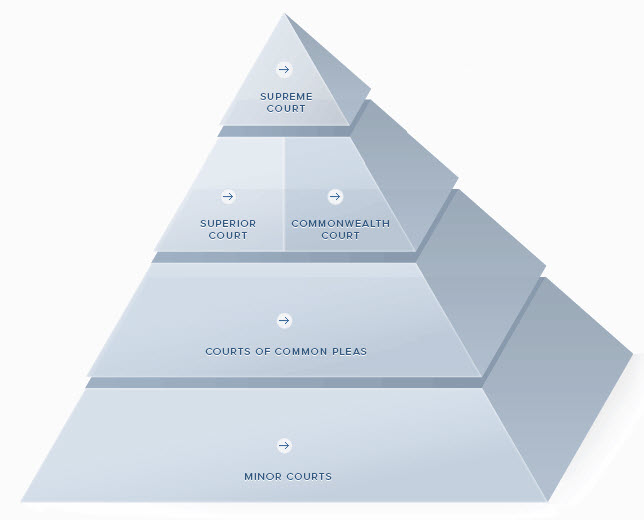 On top of the Common Pleas Courts are the intermediate appellate courts.

The Superior Court is often the final arbiter of legal disputes. Superior Court cases are usually heard by panels of three judges sitting in Philadelphia, Harrisburg or Pittsburgh, but may also be heard en banc by nine judges. The Superior Court often travels to locations throughout Pennsylvania to hear cases.  Opinions from these courts may be found in the links to the right.

The Commonwealth Court  is primarily responsible for matters involving state and local governments and regulatory agencies. It also acts as a trial court when lawsuits are filed by or against the Commonwealth. Cases are generally heard by panels of three judges in Philadelphia, Harrisburg and Pittsburgh. Cases may also be heard by a single judge or by en banc panels of seven judges. Opinions from these appellate courts may be found in the links to the right.