It states in the charter that "a college for the education of persons of both sexes."

When the United Brethren were deciding on which site they would choose for their new college, "The two conferences drifted apart when Jacob Erb and Daniel Eberly purchased Cottage Hill College, and the Pennsylvania Conference prepared to send its daughters to this 'female' institution. For a time, East Pennsylvania Conference found itself alone in its plans to establish a co-educational college. The Conference suffered some doubts and fears, but it managed to carry on" (Wallace, 8-9).

According to an article that appeared in The College Forum in October of 1889 in that year the number of lady graduates of LVC numbered 48, gentleman 101.

In November Sarah M. Sherrick, Professor of English wrote "a ringing call" (Wallace 92) entitled Our Girls and starts with "Every true woman considers herself blest in being permitted to live in this last quarter of the 19th century."

Sherrick goes on to say "But do the girls of to-day realize their opportunities, and are they preparing themselves for the responsibilities which must soon be shifted on to younger and stronger shoulders? Is this work so gloriously begun in the 19th century to be carried forward with the same impetus into the 20th? Girls, what do you say? Are you getting ready for your part?"

The Ladies Course of 1866-1867 required French and English to complete the three year Ladies Course, "which led to the degree of Mistress of Arts" (Wallace 48).

After this the course was dropped again, came back a second time and was given a four year course and degree only to be dropped another time. The Mistress of Arts degree was kept and the given to those ladies who completed the four year Scientific Course (Wallace 72).

"No lady or gentleman attending this College shall walk or ride with a person of the opposite sex, except in cases of necessity, in which case permission must be obtained from the Principal."

Source: Catalogue and Circular of the Students and Officers of Lebanon Valley College for the Half Session Ending August 2nd 1866, p. 14

Not the First to be Co-Educational in PA, but...

First listing of Female Students from the 1866 College Catalog 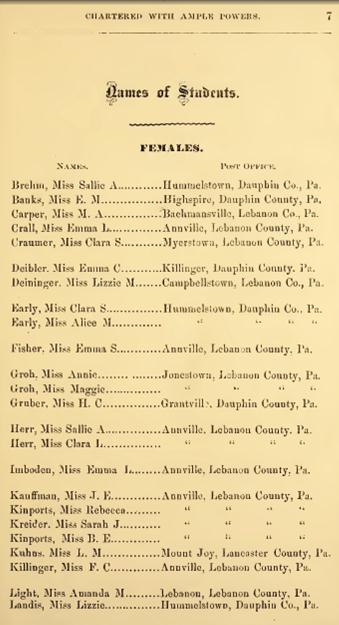 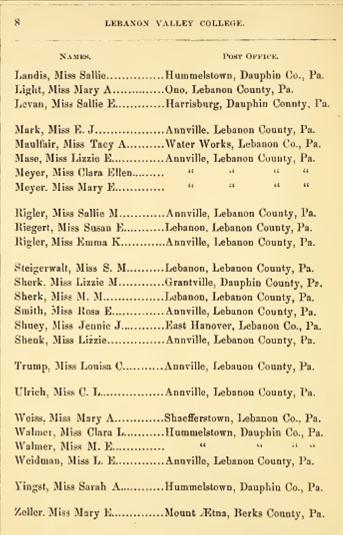 Source: General Circular and First Annual Catalgue of the Officers and Students Lebanon Valley College for the Academic Year 1866-1867, pages 7 & 8